Peatlands, a thick and condensed layer of soil formed from decaying plant materials, are rapidly being uncovered as global heating increases. Mapping them could help with greenhouse gas mitigation strategies. 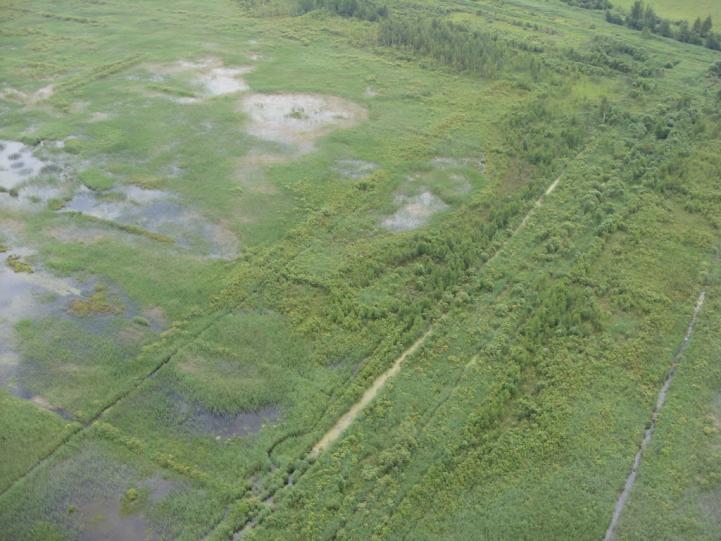 "The Peatlands of Belarus" by UNDP in Europe and Central Asia is licensed under CC BY-NC-SA 2.0

At an event during the  climate change conference in Madrid, Dianna Kopansky, Global Peatlands Initiative Coordinator at UN Environment, said, “Peatlands cover less than 3% of the earth’s land surface, but they contain twice as much carbon as in the world’s forests.” Joosten, who was also a panellist at the event said, “To give you a better perspective, the average peatland per hectare has a carbon content equivalent to that of 2 million litres of diesel.”

Peatlands are thick and condensed layer of soil formed through thousands of years of accumulation of decaying plant materials under water-logged conditions, it is most well known for trapping years of organic carbon. When this carbon-rich soil is deprived of water and gets exposed to air, it decomposes rapidly and releases all the carbon back into the atmosphere, adding to the greenhouse gas emissions responsible for climate change.

Hence it is important to protect peatlands as an effective nature-based solution to reduce the effect of or mitigate climate change. This ecosystem also helps in climate change adaptation by controlling floods, improving water availability by holding and releasing water, purifying water, and providing habitat for a variety of biodiversity.

Draining and clearing peatlands to make them suitable for agriculture and other development activities has been the main threat to the ecosystem.

“Around 0.4% of the world’s land is drained peatlands, and just this land is contributing to 5% of global anthropogenic emissions,” said Kopansky during an interview. Drained peatlands are also vulnerable to long-lasting fires, which can multiply emissions and also release toxic haze. For instance, fire in the carbon-rich peatlands of Indonesia this year emitted double the carbon of Amazon fires.

Despite their crucial role in storing-releasing carbon and regulating the climate, the distribution, location, and status of the world’s peatlands are relatively unknown.

As land use becomes more extensive, it is imperative that mapping of Peatlands are given importance.

Kopansky and Joosten both agree that peatlands have long been unrecognised. “The fact that the largest tropical peatland – 14 million hectares – was mapped in the Congo basin recently (2017) is an example. Now, it has been revised to 19 mha, which is greater than the size of England. In this patch of Congo, there is more carbon as compared to the entire forests of Congo…and time and again, we discover them in different regions,” said Joosten, who has been studying peatlands for over 40 years. 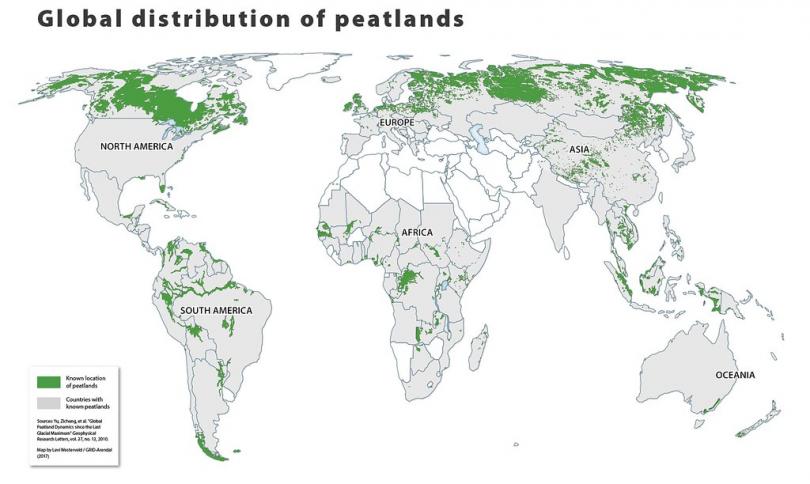 Distribution of global peatlands Photo: by GRIDArendal is licensed under CC BY-NC-SA 2.0

Ritesh Kumar, Director at Wetlands International South Asia, said, “In India, peatlands have been recorded in Kerala, Arunachal Pradesh, Himachal Pradesh, and North Sikkim. Some parts of the Western Ghats have peat too. A lot of our deltas and mangroves have the propensity to develop into peat. But there have been no systematic efforts to map them.”

Sandeep Sengupta, the Global Coordinator of IUCN’s Climate Change Portfolio and one of the authors of the report, said, “We are used to getting the services from nature for free for so long. So, the understanding that you actually have to put serious money to make sure that the world’s ecosystems are protected, restored and managed well is quite important.”

Globally, acquiring funds for conserving, restoring, and monitoring natural ecosystems has been a challenge. “30% carbon mitigation potential but only 3% public funding available for nature-based solutions. And for peatlands, the fund is lesser,” said Kopansky, adding that obtaining public-private funds is a difficult task. “There’s a lot of investment in technology and energy transition, but not many are coming forward to actually invest in nature, which is our fastest and probably the most long-term, effective way to grab carbon dioxide out of the air.”

Presentations and discussions on nature-based solutions had their space at many events at the current COP25, where world leaders, scientists, and officials have come together to find ways to tackle climate change.

Sengupta said, “I have never seen so much attention on nature-based solutions at a climate COP before, and this, I think, can be credited to the fact that the UN Secretary-General decided to have a dedicated track for it at the UN Climate Summit. It is also due to a growing realisation that investing in these nature-based solutions can provide multiple cost-effective and practical benefits to society.”

Considering their massive role in regulating carbon in the atmosphere, several events on peatlands concluded that without proper maps and monitoring procedures for peatlands and additional financing for nature-based solutions, there will be gaps in efforts to keep the global average temperature below two degree Celsius. “And as countries think of revising and submitting new NDCs in 2020, there is a very clear opportunity for all to include nature-based solutions in their NDCs in a more concrete manner to raise overall ambitions,” said Sengupta.

“But it is also important to bear in mind that nature-based solutions cannot be seen as a panacea to climate change. It is something that needs to be done in addition to reducing the use of fossil fuels to meet the 2 and 1.5 degree Celsius temperature goals set under the Paris Agreement,” he added.