Telangana's 24/7 Power Supply Plan Is a Call For Disaster

The Government of Telangana offered free electrical power to support the farming/agriculture sector - 24 hours to power 23 lakhs pump sets across the state. The prospect looks lucrative on the surface as it would definitely benefit the farmer community, and it did win a lot of farmer support. But the implementation has created an environmental mess.

When the state of Telangana finally became a separate state on 2 June 2014, it was a final call after over 6 decades of turmoil and agitation. There were many reasons flaming the demand for a separate statehood – the people of Andhra were regarded accountable for "colonising the region" by grabbing their jobs and land, and the government for not investing in the region's infrastructure. One of the major reason was the disproportionate sharing of river water. 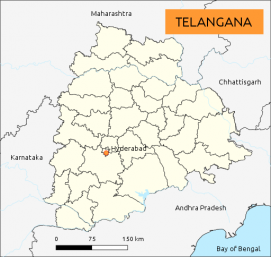 70% of agriculture in Telangana is dependent on groundwater extracted by tubewells Photo: Arjunaraoc / CC BY-SA (https://creativecommons.org/licenses/by-sa/4.0)

70% of agriculture in Telangana is dependent on groundwater extracted by tubewells Photo: Arjunaraoc / CC BY-SA (https://creativecommons.org/licenses/by-sa/4.0)

With the creation of a new state came a new political power - the Telangana Rashtra Samithi. As it came to power, it decided to offer free electrical power to support the farming/agriculture sector - 24 hours to power 23 lakhs pump sets across the state.

Though the prospect looks lucrative on the surface as it would definitely benefit the farmer community, and it did win a lot of farmer support. But the policy is flawed – a call for disaster since the long-term consequences of the policy have not been considered ever since its inception.

Irrigation in Telangana is largely based on groundwater. A Central Ground Water Board report says that in Telangana about 70% of the agriculture is based on tube wells (literally groundwater).

The policy has increased carbon emissions from the increased use of electricity even though they only need 9 hours of quality power supply for irrigation. The power generation capacity available to Telangana increased from 6,573 MW in 2014 to 14,913 MW in 2018.

The introduction of the 24 hour free power policy has also affected the ground water reserves negatively. The ground-water aquifers are being depleted rapidly because of water being pumped out 24/7 with automatic self starter pumps and in most parts being exploited.  The worry was expressed by the chief minister in his speech in the Assembly too. He urged the farmers to remove self-starters from all pump sets to save groundwater.

The policy has encouraged exploitation by benefitting only a small percentage of farming community, mostly land owners or simply large farmers. On the contrary, it has hit small and marginal farmers with small landholdings, as big farmers draw huge water using powerful pump sets leaving little to none for the rest.

The annual rainfall is the only source that helps recharge the ground water reserves as groundwater cannot be analysed without comparing with rainfall, but due to decades of changing climate – the rainfall pattern is getting scarce.

“The number of heavy rainfall days is increasing because of climate change, which was making predictions more difficult,” said Mrutyunjay Mohapatra, the director-general of the India Meteorological Department.

As the water table falls, the proportion of chloride and fluoride in Telangana’s groundwater have become higher than the standard limits, according to the report of the Telangana State Ground Water Department. These salts degrade the health of the soil, reducing crop yields.

Plus the unregulated exploitation of water sources due to sheer negligence of the government such as in this case is bound to bring in spells of disaster in the coming future, unless of course the government acts on it responsibly.

The connection between 24-hour power to groundwater to exploitation of both the resources and the marginalized farming community also brings us to examine the large scale farmer suicides in the state.

According to National Crime Records Bureau (NCRB) data, Telangana had the third highest farmer suicides in the year 2018, with Maharashtra topping the list followed by Karnataka.

The period since 2014 has seen more than 4,300 farmer’s suicides. One of the major reason for the suicides is debt, of which the loans for drilling more borewells form a significant component leaving drying wells and loss of crop yields.

A study conducted in 2019 by the Tata Institute of Social Sciences and Rythu Swarajya Vedika a farmer’s organisation, in 33 districts found that 60% of farmers suicides in Nalagonda, Medak, Warangal and Mahaboobnagar districts “were due to failure of bore wells and debt associated to it”, said Kondal Reddy, who was involved in the research.

He added: “It’s the small and micro level farmers who are effected due to this policy and these farmers belong to the vulnerable and deprived communities”

There are ways that benefit both environment and the people dependant on the land and water. Correct water harvesting techniques with the aid of researchers and scientists could save the state. It’s not just Telangana, the brains that run the country must now fully take into account the price of ecology, the environment that is taking the burns due to negligence of a few. Populist policies for votebanks have the tendendency to bite back.

What would the 24/7power policy mean if there are no farmers left to irrigate the lands?

Or rather -- what are the value of 23 lakh pumps if there is no ground water left?