'Hariyo Makha–Sikkim Against Pollution' has not only helped eliminate pollution and other demerits arising due to improper disposal, but also helped support many students with their college education and offered employment opportunities to the locals. 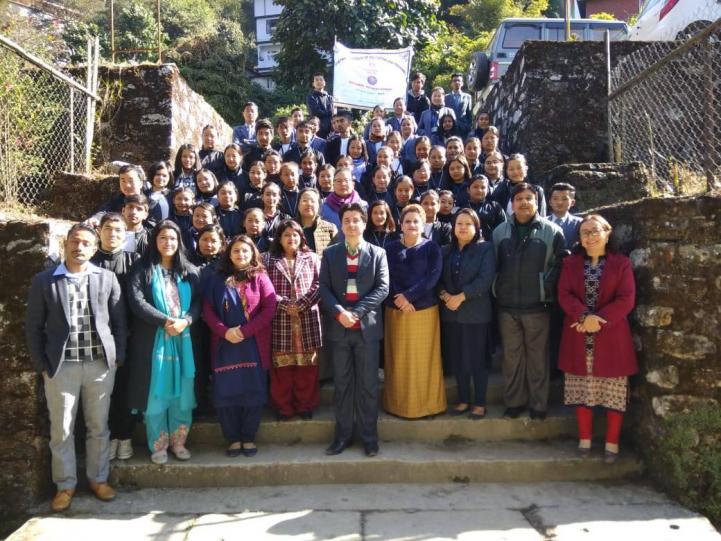 ‘Hariyo Makha–Sikkim Against Pollution’ meaning 'Green Makha', is a zero-waste upcycling project started by Mr. Lomas Dhungel, a science and mathematics teacher hailing from a village in Sikkim called Makha.

In 2015, he began working with his students at the Government Senior Secondary School, Makha on issues concerning waste management and efficient resource utilisation through a whole host of initiatives.

One of the initiatives that the school teacher has led is the upcycling around 55,000 pieces of plastic waste into covers for more than 4,000 school notebooks, followed by collecting garbage from his neighbours, segregating it and selling the dry waste to scrap dealers and recycling units.

Initially, around 10 government and private schools from East and South districts were requested to collect and donate the same from their surrounding villages.

The work received support from the nearby panchayat and the local public. Students received their basic training in plastic upcycling from him during their activity hours at school. Those interested were later asked to dedicate just 15 minutes of their time every day for such work.

“Following the initial success of our work, we enlisted the support of local scholars around Makha. We approached the Principal of Adarsh Vidhya Mandir (AVM), a nearby feeder school, and requested him to allow us to cover all the books and copies of their school for the second half of the 2016-17 academic session. We completed our task by March 2017, earning Rs 14,000 in total,” says Dhungel.

The revenue earned in 2017 out of books covers of AVM was utilised in helping one underprivileged student obtain admission into the Indira Gandhi National Open University (IGNOU) for an undergraduate course.

Between 2015 and 2019, his team has shared their ideas with more than 20 schools and institutions all over Sikkim. All training modules and ideas are shared with interested volunteers for free.

Working continuously since 2015 on the idea of upcycling of plastic wastes from eatables, Dhungel shared his big idea with the Ajambari Self Help Group (SHG) of Singbel, East Sikkim, which is 3 km from Makha.

With active support from AVM, which is also located at Singbel, the project sought to empower the women-run SHGs, for the second phase of their work. They would cover all the notebooks of AVM students with the upcycled plastics after adopting a healthy and hygienic mechanism for its cleaning. For this purpose, a plastic collection centre was established at Singbel in November 2019.

The main challenge was not just to successfully upcycle plastic waste, but also develop an experiment in establishing a successful ‘Working model on Seasonal Employment,’ claims a document issued by Hariyo Makha.

Within four months, more than 300 volunteers including locals, students and teachers from 12 government and 2 private schools from East and South districts of Sikkim collected and donated around 30,000 plastic pieces to the SHG.

“Our work was merely covering the books. We were very thankful for receiving training under the Hariyo Makha initiative. Only if we work together, can we hope for a better future,” says Krishna Sharma (40), a member of the Ajambari. 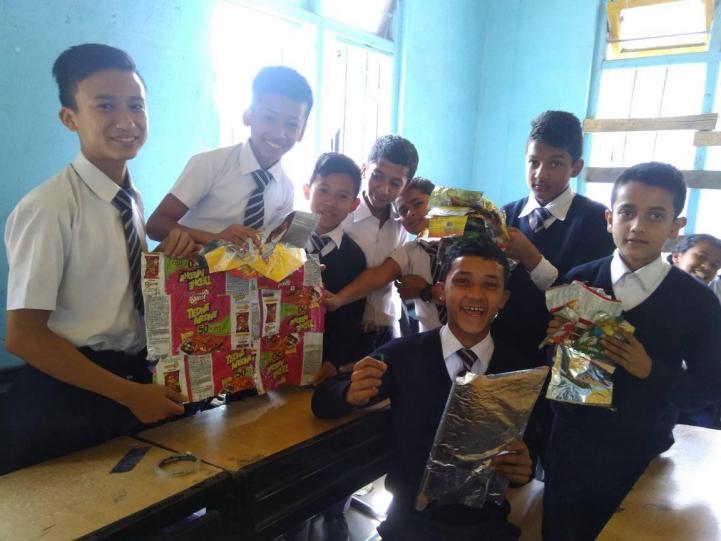 More than 2100 books and copies were covered by the SHG also earning revenues amounting to over Rs 21,000 Photo: Lomas Dhungel - Hariyo Makha (Facebook)

By the first week of March, more than 2100 books and copies were covered by the SHG also earning revenues amounting to over Rs 21,000. The SHG charged the school Rs 10 per book.

A part of the revenue will be used in helping at least two female SHG members finish their school education. Due to difficult circumstances, many women working in these SHGs had dropped out of schools nearly 15 years ago. This is their chance at finishing what they started. All the money earned, alongside voluntary contributions from his side, is being utilised exclusively to help needy students fund their education.

Meanwhile, students of AVM whose books were covered with the upcycled plastic pieces further disseminated the knowledge they obtained on effective upcycling to their villages. “For our Third Phase, we are also working with the ENVIS Department, Rural Development Department (RDD) and the State Pollution Control Board (SPCB) for helping at least 10 more SHGs and NGOs in Sikkim that would eventually work in upcycling 5,00,000 more plastic pieces,” says Dhungel.

The man truly believes that the idea has the potential to be implemented on a national scale. So far, his projects have helped a total of 7 students obtain admission into NIOS and IGNOU, with hopes to help at least an additional 5 more this year.

“Being a teacher, I am always concerned about issues related to access to education in the village where I work. During my discussions with self-help groups, I had found that due to several family problems most women there were unable to complete their education. This initiative would inspire both cleanliness, as well as revenue that could also be utilised in helping them restart their education,” says Dhungel.

In operating a ‘Book Covering Unit’ that utilises waste plastic pieces, this initiative has not only helped eliminate pollution and other demerits arising due to improper disposal, but also helped support many students with their college education and offered employment opportunities to the locals. 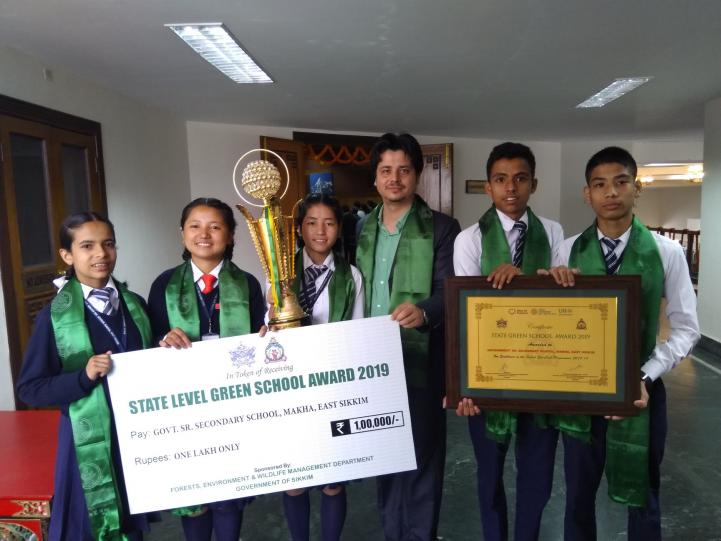 The Project has been recognized for its innovative ideas Photo: Lomas Dhungel - Hariyo Makha (Facebook)

The project has been recognized in the state as well as the National platforms for its innovative - zero waste resource management ideas and the work as a whole.

Sustainable Sikkim lauds the efforts made by Team Hariyo Makha, and hopefully we can in the future work together to further strengthen the initiative, to support the zero waste revolution born in the soil of Sikkim and also to learn a great deal from the team.