Troops from India and China fought in a skirmish along its Sikkim/Tibet border on Saturday. No one was seriously hurt. 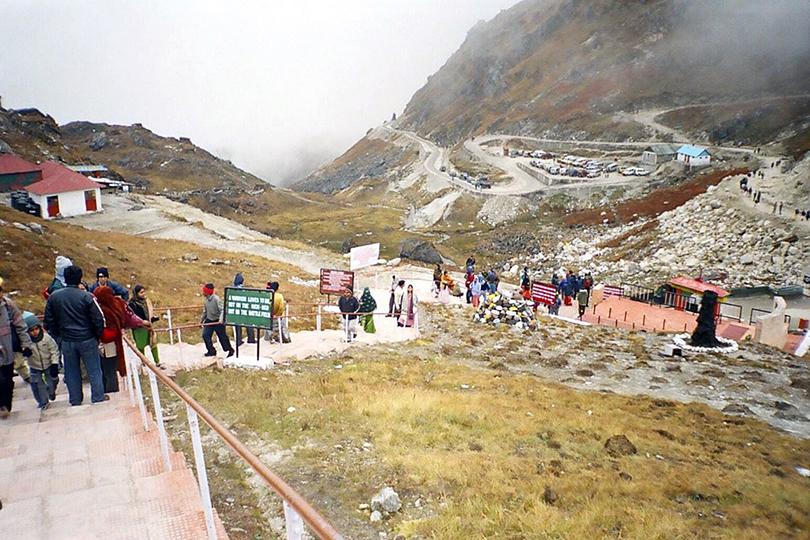 Shown above are steps leading to the Natu La pass crossing from the northeastern state of Sikkim into China. The steps are on the India side. Photo: Wikipedia/Public Domain Image

The fight blew up near the Naku La crossing in the northeastern state of Sikkim, India.

The skirmish happened because the pass, which is more than 5,000 meters (16,400 feet) above sea level in the Himalayas, is a disputed territory with occupied Tibet on the Chinese side and Sikkim on the India one.

According to Mandeep Hooda, a spokesman for the Indian Army Eastern Command, “Aggressive behavior by the two sides resulted in minor injuries to troops.” He said that, “It was stone-throwing and arguments that ended in a fistfight.”

Hooda said that this “stand-off”, as he called it, happens occasionally in the region. He said that, “Temporary and short duration face-offs between border-guarding troops do occur as boundaries are not resolved.”

Hooda said the current clash was resolved via what he referred to as “dialogue and interaction” which was handled at a local level, without the central governments of Beijing or Delhi involved.

This region is just part of an estimated 90,000 square kilometers (approximately 35,000 square miles) of territory which India currently controls but China still claims belongs to it.

The last war between the two countries was in 1962 when China attacked India without provocation.

In 1954 China and India has resolved their border disputes and in 1956 China repeated  assurances that it had no claims on Indian territory. That changed with the 1959 invasion and occupation of Tibet by China and China's psychopathic ruler, Mao Zedong, became infuriated that India provided the Dalai Lama and other Tibetans with asylum. China then started claiming Indian territory as its own in order to incite conflict. However, India contributed to the tensions by pushing soldiers past the previously agreed upon borders into what it knew China would consider its own territory.

In 2018 China was found to be secretly building a road in Bhutan towards the Indian border in what is called the Chicken-Neck region where a small strip of land connects the main part of India with its eastern states. The road construction was halted under international pressure but served to remind nations of the aggressive and sneaky nature of China.