Glacial lakes spawning from rapidly melting ice and shrinking glaciers in the highlands of Bhutan threaten to unleash a deadly force in the form of Glacial Lake Outburst Floods (GLOFs), posing a serious danger to downstream communities and infrastructure. 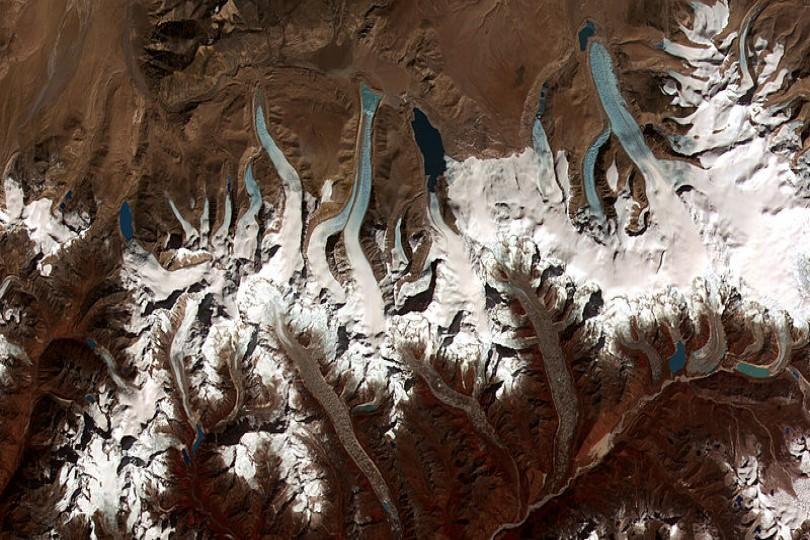 Image showing the termini of the glaciers in the Bhutan-Himalaya region.  Photo: NASA

Bhutan, a small land-locked Himalayan nation and the only carbon negative country in the world, is among the most vulnerable in terms of global warming. Climate change-induced rising temperatures are rapidly melting the country’s glaciers.

According to a 2008 United Nations report, glaciers in Bhutan were retreating at a rate of 30–40 meters per year.

Furthermore, a US geological survey report found that, 66 glaciers in Bhutan have decreased by 8.1 percent in the last 30 years.

The melting glaciers are feeding massive amounts of water into the surrounding lakes, weakening their natural barriers made of loose rock and dirt held together with the glaciers around it. The barriers can easily burst open due to melting ice weakening its structural integrity, resulting in massive flooding downstream.

“With global warming, glaciers are melting and our water resources are moving faster downstream. We call it a tsunami in the sky, that can come anytime,” said Karma Drupchu, the national director of the country’s National Center for Hydrology & Meteorology (NCHM).

“Any kind of breach will result in a huge flood coming down the stream. It will have huge consequences because more than 70 per cent of Bhutan settlements are along the river valleys ... not only loss of life, but huge economic loss,” he said.

Researchers from the NCHM have identified 2,674 glacial lakes, of which 17 have been categorized as potentially dangerous. Researchers warn further melting of the country’s 700 individual glaciers would result in more lake formations, subsequently increasing the likelihood of devastating future GLOF events.

Prime Minister Lotay Tshering, stressed how the glaciers have a huge physical and spiritual impact on the country.

“It concerns us a lot because from a spiritual point of view, it’s not just a pool of water. Spiritually, we believe that there is life in it, we respect that and environmentally it is a fact that we are losing our glaciers to global warming,” CAN quoted PM Tshering, as saying. “We’re under constant threat and that is the most unfair part.”

“Glaciers that are lost, are lost forever. How many lives, not just human beings, but other lives are dependent on that? Not just the country and the economy but the whole lifecycle will be destroyed. but soon in coming generations there may not be any lakes to burst. That would be a real disaster,” he added.

Although GLOFs are not a new phenomenon in Bhutan, their frequency has risen in the past three decades. Significant GLOFs occurred in 1957, 1960, 1968 and 1994, devastating lives and property downstream.

The 1994 flood killed 21 people and caused extensive damage to agricultural land, destroyed houses and wiped out fish stocks in the river.

Ever since the tragedy, scientists have been closely monitoring the lakes and the impacts of temperature on their stability. Scientists have installed sophisticated early-warning systems throughout the lake and river systems to warn people in the danger zones in case of any threat. Simulation drills and awareness campaigns are also being carried out by the government to build resilience among at-risk populations.

“They (people) are worried. They know the glacial lake is going to burst at any time due to global warming,” remarked Tshewang Phuntsho, an officer from the Department of Disaster Management in Punakha. “But at the same time, we are also prepared.”

Apart from conducting annual inspection of some of the more dangerous lakes, personnel have also been stationed permanently near the edge of Thorthormi Lake in the Lunana region, one of the most volatile glacial lakes in Bhutan, to monitor any changes or risks.

“Some lakes are nearly impossible to reach there. But most of the potentially dangerous ones, we went there and did the ground checks”, said NCHM executive geologist, Phuntsho Tshering.

“As a glaciologist and a scientist, seeing them is quite scary. If something pushes down, the barriers cannot hold. We know something is happening up there, it’s not safe, it’s critical,” he said.

Along with affecting agriculture - the source of livelihood for around 70 per cent of the population – the country’s major revenue driver, hydropower also stands at risk.

About 75% of all electricity generated in Bhutan is exported to India and the revenue from the exports constitutes 25% of its gross domestic product.

“Our biggest revenue is from hydropower as of today and the hydropower we have is very highly climate dependent. We have realised that and we are a little worried about that,” remarked Prime Minister Lotay Tshering.

The country’s largest hydropower projects, the 1200 MW Punatsangchu I and 1020 megawatt Punatsangchu-II, are both being constructed on the same system, downriver from Thorthormi Lake. The country is also building a “reservoir type” dam to ensure a constant supply of power even during the lean season. The Sankosh Hydroelectric Project is one of the biggest economic projects envisaged by Bhutan capable of generating 2,500 megawatts of power.

Despite the increased risk of GLOFs, earthquakes and river reliability, the government is moving forward with the projects.

“Sankosh would be one mega hydropower project we’d like to start and then see how it does for the next decade or so. If the climate change becomes more dependable, if it settles down a bit, we can embark onto the next project. We have to be very careful with this,” said Prime Minister Lotay Tshering.