According to the new proposed Environmental Impact policy, if the government decides to destroy, lets say, your backyard, with the power vested upon them through this policy they can and they will without your say. 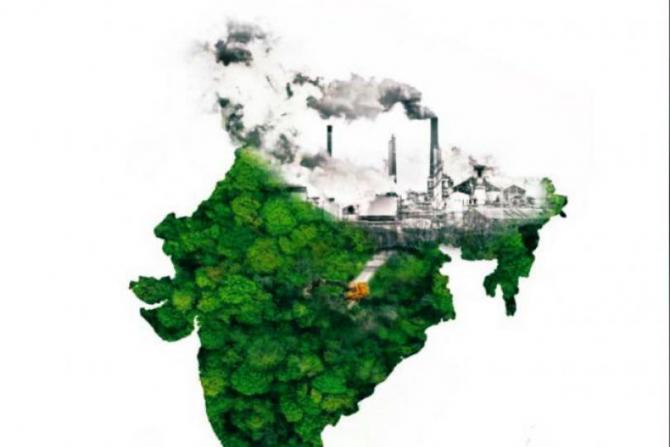 The new environmental policy allows large scale exploitation of resources and minimum to no charges against the offenders. India, incredible India! Photo: Save NorthEast Campaign

EIA stands for Environmental Impact Assessment. It is a process that studies the impact (positive or negative) of any project, policy, or program on the natural environment. It checks generally infrastructural projects such as railway projects, dams, mining projects, and the expansion of industries.

The EIA was initially practised by developed nations, with USA first introducing the Environment Policy Act (NEPA) back in the year 1969, which with years was followed by mostdeveloping nations.

In India, the Environmental Impact Assessment started in 1976-77 with examinination of river-valley projects. The EIA was termed one of the best policy innovations in the 1900s.

The newly amended EIA Draft 2020 however is not the same.  The policy has gone through numerous amendments and the recent one is a ticking time bomb in disguise.

Why Is The EIA So Important?

We are aware of the fact that Climate change is happening due to human activities, pollution, deforestation, greenhouse gas emissions, etc.

Our nation has already witnessed climate change driven events like the  super cyclone Amphan, Nisarga,  crippling droughts like the one in Chennai(2019), the floods caused by extreme and above normal rainfall, beyond normal heatwaves, disruption in weather patterns and even rising sea level.

India lost $37.802 billion in 2018 due to climate change-triggered disasters and catastrophes. It’s said that this economic damage is so much that if this money would be distributed to 100 million people, everyone would get ₹2,80,000, and also it’s more than half of India’s defence budget.

The EIA, if diluted, will inevitably result in more such events due to the exploitation of our biodiversity and of forest lands along with unobjectionable exploitation and violation of the rights of our Indigenous communities.

Let’s examine the way the draft got released:

First off, when the whole country is fixated upon the hows and whys and what of this recent pandemic, when the entire nation is locked in their homes and are busy clapping for our warriors and banging steel plates and gongs, singing "Corona go… corona go", the Government takes advantage of our collective distraction and decides to pass a new and threatening environment policy.

Second, the time frame allotted to the public to raise objections in regards to any environmental review is reduced from 30 days to 20.

And lastly when the wise generation (cheering fridaysforfuture.in, letindiabreathe.in and thereisnoearthb.com. ) points out the flaws of the policy, their voices are cut out – yep  the sites were blocked  only  to be unblocked later citing a “clerical error" by the Delhi police.

Now onto the real matter of the draft:

The Ministry of Environment, Forest and Climate Change (MOEFCC) came up with a notification that the EIA-2006 will be diluted to allow for the “Ease of doing business,” looking at the current economic stress on India due to the pandemic.

According to the new policy if the government decides to destroy, lets say, your backyard – with the power vested upon them through this policy – they can and they will without your say.

You cannot oppose it, not even legally unless the person or the entity that has violated the “law” goes to the authorities themselves and reports his offense (Imagine a thief going to the  police to confess his crime).

BONUS: The policy only allows elected representatives like MLA’s, MP’s to report the violation. The public can have no say.

So with the draft passed, companies can clear a whole forest to build an airport now and later ask if cutting of trees is environmentally correct or not. Of course they will be charged a fine which is nothing compared to the gains from exploitation -  but what use is a fine when our land is stripped naked?

The list of projects that can be started without prior environmental clearances include inland waterways, national highway projects, rivers, seas, forests. Today it’s Dehing Patkai Wildlife Sanctuary being scavenged in Assam. Tomorrow it could be Kanchendzonga National Park.Nothing will be spared, which alarmingly puts our biodiversity rich North-East region in huge danger.

If a project is considered strategic ( important for the safety of our country) it can be started without notifying the public. What are the chances of this provision not being misused by the government?

A document of a project of more than 1000 pages would need a thorough assessment to weigh its  consequences  on the environment.  Earlier, the public were allowed 30 days to raise questions if any, now the public response time has been reduced by 10 days. How fair is this?

Public hearing in any other mode:

Public hearing is supposed to be addressed physically, like in village level meeting or gathering to explain and discuss policies and problems but now it can be organised in any other mode like video conferencing.

But with half the Indian mass still unexposed to modern technology - the tribals for example- the ones who will be affected the most – Will they be able to attend a zoom conference?

And the fact that this policy hasn’t  been translated to regional languages to be understood by the diverse Indian mass despite the law itself says a lot about how dark this policy is.

So how do we stop The EIA?

Yep the last date to file objections or suggestions with the Environment Ministry (MOEFCC) is August 11, 2020.

If it is passed, we risk losing the last remains of what our coming generation will have and the goal of fighting climate change will become difficult.

So let us all band in together and give our one last best shot for our Land, our rivers, our forests and our future with these to do’s: