Ice stupas, a form of glacial grafting in which natural processes can exclusively shape their growth, partnered with support from local indigenous populations in higher altitude regions threatened by global warming, could provide a simple water storage method -- and the opening of an exciting field of holistic, aesthetic and technical inquiry. 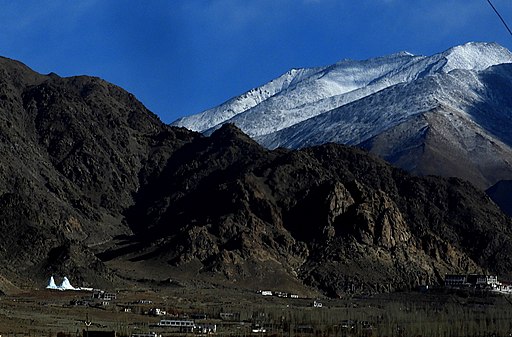 Mountains are the water towers of the world. They provide freshwater to half the world’s population for irrigation, industry, domestic use and hydropower. But mountains are also among the regions most sensitive to climate change. Inevitably mountain communities are the first faced with the task of adapting and mitigating to the various challenges such changes present.

In the dry desert of Ladakh, farmers depend on water from melting snow and glaciers. Blame it on the changing climate, there’s very little to no snowfall during the winter.

When world leaders assembled in Kyoto( Dec 1997) to put in place the first treaty to address climate change, Chewang Norphel had already pioneered an adaptive solution to water worries in the high-altitude deserts of Ladakh, northwest India.

Chewang Norphel, a retired Ladakhi civil engineer, now a renowned climate hero - hiked up to observe the changing streams for himself. He then began building artificial glaciers by creating closed embankments near the glacial beds and diverting meltwater into them that froze in the winter. It stayed until the warmer weather came and it could be sent streaming downhill for summer use. Norphel built a dozen reservoirs, earning the nickname of “Ice Man of Ladakh”.

However, Norphel found that doing construction work many miles above the villages was costly and backbreaking, and upkeep was also tough. Sometimes, too, the water evaporated before it could be used.

Then entered a young man, mechanical engineer and teacher y the name Sonam Wangchuk who carried on the legacy of Chewang Norphel up a notch. 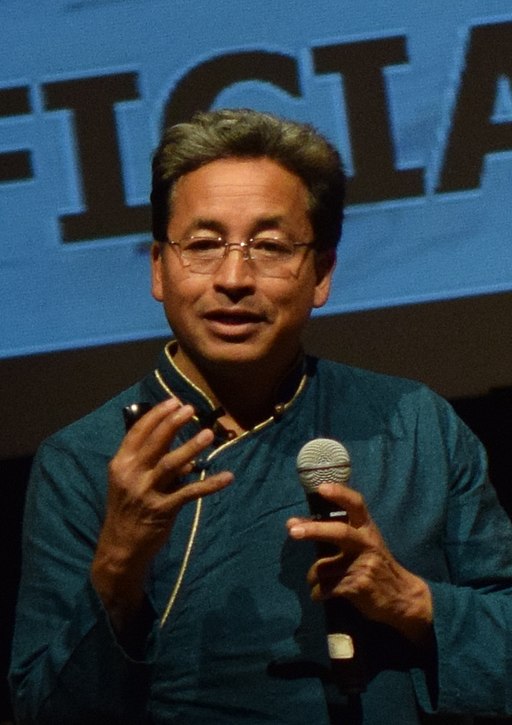 Wangchuk was a self-described problem solver. “If there’s a stone in the path,” he confesses, “I can’t go on further without removing it because it could hurt someone.” Troubled by the limitations of the traditional school system, he cofounded an alternative school in Ladakh in 1988. The Students’ Educational and Cultural Movement of Ladakh, or SECMOL, has become known for its solar-powered buildings (which students helped build), its largely student-run campus, and its offering classes in the local dialect.

Listening to the Ice Man’s problems, Wangchuk was intrigued. It was an exciting challenge — something he’d loved since he was a boy when his grandmother amused him with puzzles and riddles.

The design that Wangchuk came up with was based on “concepts found in high school physics,”

The key principle used was that within a pipe, water stays level. Simply put, if the water at one end of the pipe is at X height, then on the other end it will rise or fall to the same X height forming a conical ice stupa.

Ice Stupa is a form of glacier grafting technique that creates artificial glaciers, used for storing winter water (which otherwise would go unused) in the form of conical shaped ice heaps. During summer, when water is scarce, the Ice Stupa melts to increase water supply for crops

The first prototype Ice Stupa was made at the SECMOL school in the winters of 2013. Wangchuk says, “Taking inspiration from ancestral practices and veteran Ladakhi civil engineer Chewang Norphel’s work on artificial glaciers, Ice Stupas have been designed at various locations across Ladakh ever since. ”

With the combined efforts of the Ministry of Tribal Affairs and SECMOL, the project has come a long way. While there was an Ice Stupa in one village in 2013-14, the expertise expanded to 26 locations across Ladakh in 2019-20 after the government chipped in.

This year, the project started from the village of Kulum, Ladakh. It was implemented over a period of four months between November 2019 and February 2020 , and was completed with the help of residents of Kulum (locally called Kulumpas). ” This provided them hands-on experience of the process, thus inducing active participation at all stakeholder levels,” adds Wangchuk.

If hundreds of these stupas were in operation — and Wangchuk hopes someday there will be — they could have the potential to fully compensate for the diminished glacial flow.

Word of his project reached mountaintops across the world.

He went on to build Europe’s first ice stupa, in the Swiss Alps - Morteratsch Glacier, and worked on averting a glacial lake outburst in Sikkim.

Wangchuk hopes that if locals adapt now, their descendants won’t become climate refugees. “We in the mountains are minorities, not just ethnically but climatewise,” he says. “Things that work in New York or New Delhi do not work in the mountains. We have to find our own solutions for our problems.”

His innovation has not only earned him accolades within India, but globally as well. He was one of five people worldwide to win the Rolex Award in November 2016, the prize money was used  to establish a pan-Himalayan research university that will address the region’s environmental concerns.

Interventions such as Sonam Wangchuck’s Ladakian Ice Stupas are examples of how creative, meaningful, socio-environmental architectural projects could redeem our own water-stressed regions.