Despite Pandemic, Atmospheric CO2 Outputs in 2020 Remain at about 95% of Normal

Despite the pandemic having forced drastic cutbacks in greenhouse gas emissions tied to planes, trains, and automobiles, the World Meteorological Organization says 2020 will still end with emissions running at least at 92.5% of normal. So much for extreme measures making any difference. 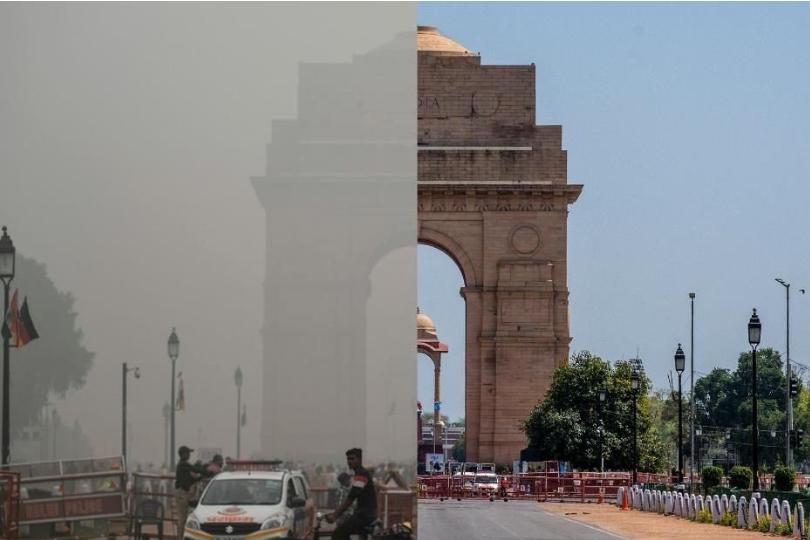 On a Clear Day you can see New Delhi: Decreased traffic in the city of New Delhi, India during the peak of the pandemic this year produced a much clearer sky than many had seen in their lifetime. Despite that, the World Meteorological Organization has calculated overall greenhouse gas output has dropped by less than 10% of normal for recent years. Photo: EXrayFuSion, via Twitter

A recurring photo op captured throughout this year was of formerly polluted big cities, from Shanghai to New Delhi, captured for the first time in decades with clear skies and empty streets.

Those looking at those sights might have thought all those grounded aircraft and garaged automobiles that were no longer heading out every day to spew their emissions into the air might have made a major difference in overall greenhouse gas emissions.

According to a just-released report from the United Nations’ World Meteorological Organization (WMO), all those months of drastically reduced air and car travel made only a slight throttling in the total carbon dioxide emissions worldwide. When the final counts are tallied, the WMO says total annual greenhouse gas emissions will have dropped from at most 7.5% to a likely minimum of 4.25% from normal. Worse still, total carbon dioxide concentrations in the atmosphere have also continued to increase anyway.

“The lockdown-related fall in emissions is just a tiny blip on the long-term graph,” said WMO Secretary-General Petteri Taalas as he announced the new numbers.

As to why carbon emissions have remained so high, there are two primary reasons. “The bulk of [human-caused] emissions,” Matt Huber noted on the Unequal Carbon Footprints website, “are generated in the industrial sector and operated by very large and profitable corporations.”

He continued, saying that, “If we are going to solve climate change, we should reform the behaviors of these actors first.”

Related to that are the many increases in local delivery services which began to be used for the first time in mass quantities around the planet, as people remained in lockdowns. From motorcycle food deliveries to staggering increases in shipments through e-commerce sites like Amazon.com, there were many other sources of anthropogenic [human-related] emissions that replaced some of the old ones when all of us were commuting at normal levels.

A second major reason for the continued high level of carbon emissions was the secondary cycle effects that had nature dumping both carbon dioxide and methane into the air at continued record levels in 2020. These included the many wildfires which broke out along the edge of the Arctic in northern Siberia from May through August this year, and similar wildfires in places like Australia’s southeastern coasts and within the Amazon rainforests in South America beginning early in 2020. Another secondary GHG emissions effect which appears to be beginning to play out is this year’s measurable underwater release of methane hydrate stores, particularly in the southern Arctic oceans.

In making its report regarding the continued high levels of carbon emissions heading into the air, the WMO did follow its warnings with the oft-repeated fallacies that emissions cutbacks could save the world, if somehow global emissions could be cut by 50% by the end of this decade. The reality is the carbon emissions cycle is now out of our human controls, at least with anything short of blowing the entire atmosphere off the planet and replacing it with a new one.

The message which also should be heard loud and clear from the WMO report is that even our most severe of global cutbacks in fossil fuel use, such as happened this year during the pandemic for the first time in history, was only capable of making an insignificant difference in CO2 outputs.

It all points to a far different and hotter future ahead that we must accept, and collectively figure out how to adapt to for our own and our planet’s survival.

It is time to accept that the climate crisis is unstoppable, and that conventional fixes such as cutting back on fossil fuel emissions and investing in carbon capture technology will not work fast enough to save us. What is needed instead are radical new approaches for how to live and work in a much hotter future.