2020 Ties as Warmest Year on Record

The Copernicus Climate Change Service (C3S) just released its annual report on the state of the climate crisis in 2020. It is now tied with 2016 as the hottest year ever recorded. 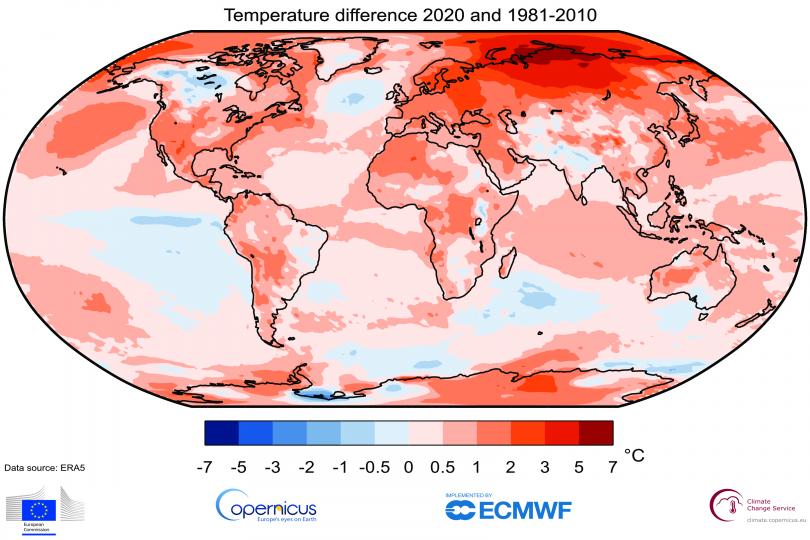 Average air temperatures around the world in 2020, measured at a height of two meters (6.7 feet) for 2020, shown relative to its 1981–2010 average. Photo: Copernicus Climate Change Service/ECMWF

The Europe-based Copernicus Climate Change Service yesterday announced the sad truth that 2020 overall was the warmest year on record, equal to the previous warmest year ever just four years ago.

According to its figures, the temperatures around the globe in 2020 averaged 0.6 degrees Centigrade (1.08 degrees Fahrenheit) over temperatures for the 1981-2010 reference period.

Contributing to this was the surge of temperatures in the Arctic and northern Siberian region, which recorded an increase of 6 degrees C (around 11 degrees Fahrenheit) over average values from the same reference years. The report noted that western Siberia in particular had a much hotter winter and spring, in a pattern which extended throughout summer and fall in both the Siberian Arctic area and over the much hotter-than-usual waters of the Arctic Ocean.

That Arctic heating has already contributed to the lowest amount of sea ice present as of October 2020, dangerous wildfires in Siberia, and extreme secondary effects which are driving higher amounts of underwater methane and above-ground pumping of carbon dioxide into the atmosphere.

The global average temperature increase made the period from 2015-2020 the six hottest years on record.

Last year the heat bubble was much worse in Europe, where it set a new high for the warmest year ever. The European continent was a full 0.4 degrees Centigrade above the last record year of 2019.

Tying with the previous hottest year on record is especially notable considering that in 2020 the natural cooling pattern of La Niña was present for much of the second half of the year. To put that in perspective, part of the reason 2016 had risen to the hottest year ever was in part because the parallel presence of a particularly forceful warming El Niño event. 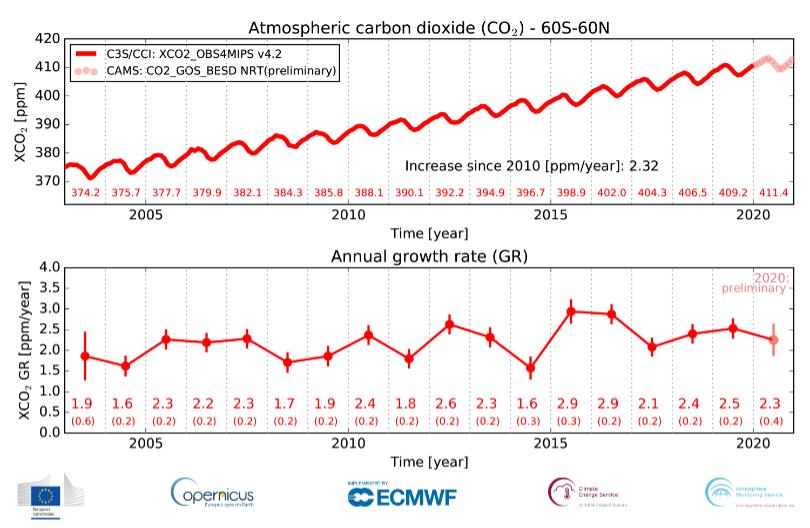 Though the high amount of carbon emissions already present in the atmosphere as the year began would have also contributed to trapping more solar heat than before, last year carbon dioxide concentrations also surged, to an average global maximum of 413.1 ppm. That put the total XCO2 growth rate at 2.3 +/- 0.4 ppm per year. This happened also in a year in which the coronavirus crisis caused most air traffic, much land-based vehicle traffic, and significant cutbacks in industrial production. Despite all that, the carbon dioxide level was at its highest ever.

The year brought with it unprecedented wildfires burning on virtually every continent, including the Australian bushfires which have killed an estimated 1 billion animals, and the massive burnings in the forests of California and Oregon in the United States, leading to over $16 billion in damages there.

The summer and early fall also produced record ocean warming trends for much of the world. In the Atlantic, that warming produced the largest number – 29 – of named storms in history. 12 of those storms, with six hurricanes among them – tying another record, made landfall on U.S. soil. The state of Louisiana was targeted the most by those storms, with five tropical storms or hurricanes crashing across the Gulf of Mexico onto its borders during the 2020 hurricane season.

The Copernicus report, which will soon be updated by a similar tally by NASA expected to be released on January 14, underscores the urgency for action on behalf of governments and other institutions to do something about global heating. It is, however, far too late to stop the juggernaut that is the climate crisis, since multiple systems have already been triggered which will continue to release carbon dioxide and methane into the atmosphere for decades to come. Cutting back on emissions may help slow that and should be encouraged, but no one should be relying on that to save us. Radical solutions such as mass carbon capture, balloon systems set up in space to block the sun, or large-scale carbon capture techniques may also be considered, but there is no time to wait to see if they might work.

What is needed instead is to step up and recognize this is going to be a much hotter world than ever, even within just a few years. The massive droughts in Asia, Africa, and Australia of 2019 and 2020 will soon be remembered as just the beginning of a major shift. So too will be the record year of extreme weather around the globe in 2020, along with terrifying increases in polar ice melt, wildfires virtually everywhere, and oceans warming to the point where mass extinctions will take place within.

The action to be taken now is to take control of our future by planning for what is already on its way. We need new means of construction, producing energy, growing food, preserving precious water resources, and managing our waste. It is in our power now to make those happen.