9 Killed, Over 140 Missing as Himalayan Glacier Gives Way in Uttarakhand 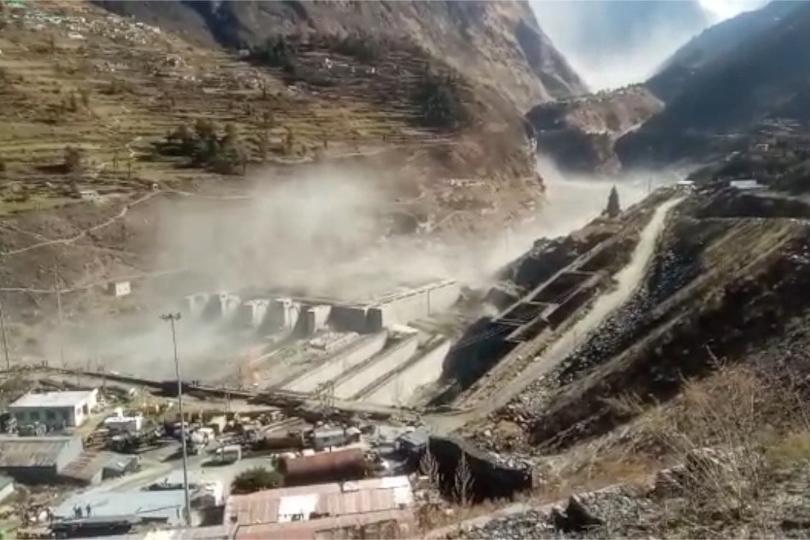 Site of the hydroelectric power plant which was destroyed by the flash flood in northern Uttarakhand, India, on January 7, 2021. Photo: Er. SK Verma, via Twitter

Uttarakhand is located on the eastern border of Nepal, along the Chinese border.

As temperatures have soared along the entire Himalayan region, glaciers there have been melting at an accelerating pace. Numbers currently show the melt is increasing at a rate at least twice what it was just twenty years ago, and even then, global warming had already begun taking its toll.

In the region near Mt. Everest, for example, the snowmelt is so severe the trail to that mountain’s peak is often barren of snow. Bodies of past travelers who did not make it and abandoned sites where others huddled in once-brutal snowstorms are now exposed for large portions of the year.

Around 11 am IST yesterday, part of the Nanda Devi glacier located on the northern border of Uttarakhand gave way because of similar melting in that part of the Himalayas. With mostly ice to prop it up, the melt created fissures which were likely slowly widening, possibly for months. Though it will take some time to determine the entire flow of events, it is possible an avalanche also triggered by global heating may have dumped additional weight on the glacier which eventually gave way.

When the weight of the ice and embedded rocks were too much for the remaining ice to hold, the glacier broke apart explosively.

It then dumped an avalanche of rocks, ice, and snow which first obliterated the Rishiganga Hydroelectric Power Project dam. As the dam gave way, a flash flood of catastrophic proportions roared downstream along the Dhauliganga and Alaknanda rivers. It caused serious damage to a hydroelectric power site under construction in Tapovan.

Other hydroelectric plants in the region were saved from more serious damage through quick action by officials who ordered them to open their water gates, to ease pressures from the surging waters.

When the floods subsided, what was once a green landscape nearby had been torn apart and countless houses were destroyed. Grey mud and rock covered virtually everything.

The flash flood and fast-moving debris field also killed at least nine people counted so far. Authorities estimate as many as 140 or more present in the area are unaccounted for at this time, so the death toll will likely rise further. The missing people were for the most part employees at the two power projects. Those in the local communities who may also have been killed have been harder to account for.

Two tunnels connected with the projects had their exits blocked by the flash floods and portions of the Rishiganga plant debris. 16 individuals who had been working in one of those tunnels were rescued, thanks to the quick work of emergency crews deployed to the region to assist. A second tunnel which was also blocked and has approximately 30 individuals stuck inside is not yet open but has a second team working to secure an opening and rescue those within.

“The rescuers used ropes and shovels to reach the mouth of the tunnel,” said Chief Minister Trivendra Singh Rawat, the senior elected official in the state.

Ashok Kumar, police chief for Uttarakhand, said that he believes as many as 50 people who are missing from the Rishiganga project site may eventually be discovered to have died in the catastrophe.

The blame for this disaster is with human beings, but less from the stack of hydroelectric power plant dominoes placed in the path of the flash flood than from global heating created by reckless burning of fossil fuels for generations.

What happened in Uttarakhand is what researchers refer to as Glacial Lake Outburst Floods (GLOFs).

In a study published a year ago by scientists with the University of Potsdam, Germany, an analysis of 5.4 billion simulations of situations just like what happened yesterday was summarized for the Himalayan region. It reviewed the high risks growing annually for glacier barriers across this unique high-altitude mountain region. Those risks were exacerbated by melting which is running at over twice the rate it used to back in the 1980s.

The rates of melting north of Uttarakhand are melting at a rate over three times what they were in the same time period.

“The barriers, made naturally with loose rock and dirt held together with the glaciers around it, can easily burst open due to melting ice weakening its structural integrity,” the authors wrote about the work when it came out in January 2020. These bursts will likely result “in glacial lake outburst floods (GLOFs), which will have catastrophic societal and geomorphic impacts.”

The most recent example of this kind of regional disaster happened in 2013, when a glacier-supported lake 3,845 meters above sea level collapsed just north of Kedarnath.

The situation is expected to grow worse as the Himalayas discharge an estimated 8 billion tons of water from rapid runoffs every year. That calculates out to the equivalent of 3.2 million Olympic-sized swimming pools.

Extrapolations from previous studies also show that up to two-thirds of all Himalayan glaciers are expected to disappear just in the next decade alone. That will be felt widely in the form of increasing drought and decreasing electrical power to be generated from hydroelectric sources, the most common form of power in much of the region.

The other way that will be experienced is via more catastrophic flash floods like the one which just rammed through the northern border of Uttarakhand.