Forget Counting on the Amazon Rainforest to Save Us

A new research project investigating the Amazon Rainforest’s ability to act as a carbon sink discovered something unexpected and seriously disturbing. They figured out the Amazon Basin is already a net carbon emitter and a powerful accelerant to global heating. 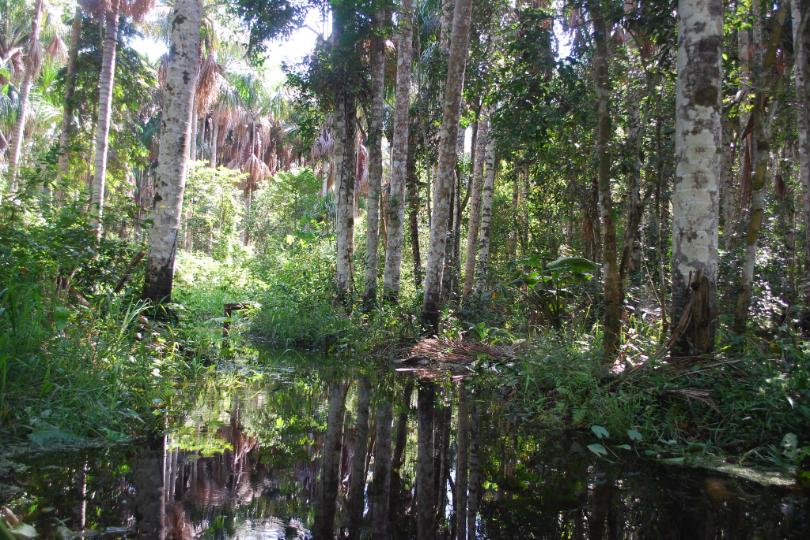 A swamp in the Amazon Rainforest. Photo: Ivan Mlinaric, CC

A new effort by an international team of 30 scientists from New York, the United Kingdom, Brazil, Sweden, Colombia, and Peru has reached a conclusion no one imagined would have happened so fast.

After digging through a forest of data examining the elaborate biological ecosystems of the Amazon Basin, these scientists have determined this once critical resource to act as a net carbon absorber is no longer functioning that way. They have concluded instead that it is already contributing to global warming on its own, just like many other former carbon sinks.

After decades of abuse from deforestation for mining, cattle-farming, and other agricultural interests, the Amazon now falls into that category of “secondary climate crisis” contributors that will now continue to make the world hotter. It will happen regardless of whether humankind ever gets its act together and bans fossil fuel use.

The study, described in the paper, “Carbon and Beyond: The Biochemistry of Climate in a Rapidly Changing Amazon”, was funded by the National Geographic Society and was just published in the journal Frontiers in Forests and Global Change.

As the paper notes in its abstract, past analyses of the Amazon have mostly “focused on the cycling and storage of carbon”, and in the form of carbon dioxide. This time the scientists conducted a detailed “consideration of other significant biophysical climate feedbacks [i.e., CH4 (methane), N2O (nitrous oxide), black carbon, biogenic volatile organic compounds (BVOCs), aerosols, evapotranspiration, and albedo] and their dynamic responses to both localized (fire, land-use change, infrastructure development, and storms) and global (warming, drying, and some related to El Niño or to warming in the tropical Atlantic) changes.”

After their digging through multiple different databases of information, as well as after considering the margins of error in that data, they realized the previous focus on carbon dioxide retention within the rich ecosystems of the Amazon had managed to overlook something serious going on there.

“We conclude that current warming from non-CO2 agents (especially CH4 and N2O) in the Amazon Basin largely offsets—and most likely exceeds—the climate service provided by atmospheric CO2 uptake,” the scientists wrote. “We also find that the majority of anthropogenic impacts act to increase the radiative forcing potential of the Basin.”

As the paper explains further, despite that there was a short “transient period of reduced deforestation and increased optimism” about the future of the Amazon Rainforest, mostly taking place prior to when current climate denier President Jair Bolsonaro of Brazil took office, those days are now long past. Under Bolsonaro’s term of encouraging what the authors called “rising agricultural conversion and illegal logging activities”, destruction of the Amazon has been accelerating quickly.

“This resurgence,” the authors say in their study, “has renewed concerns that the region is rapidly approaching a catastrophic tipping point.”

“Cutting the forest is interfering with its carbon uptake; that’s a problem,” said study lead author Kristofer Covey, a professor of environmental studies at Skidmore College, during a recent interview about the results of his team’s work.

“But when you start to look at these other factors alongside CO2,” he said further, “it gets really hard to see how the net effect isn’t that the Amazon as a whole is really warming global climate.”

In an interview with National Geographic about the new study, climate science expert Patrick Megonigal, an associate director of research at the Smithsonian Environmental Research Center but not involved in the study itself, emphasized the critical importance this study has done by expanding “the conversation beyond carbon dioxide, which is what 90% of public conversation is centered around.”

“CO2 is not a lone actor,” he continued. “When you consider the whole cast of other characters, the outlook in the Amazon is that the impacts of human activities will be worse than we realize.”

As to what to do about it all, study lead author Covey made statements which suggest nothing less than rewinding the tape of our past abuse of the Amazon could save things. He said that fossil fuel emissions would have to halt everywhere, Amazon deforestation would have to grind literally to a halt, and that it would also be necessary to reduce “dam building and [increase] efforts to replant trees.”

Sadly, none of that is likely to happen, and other studies suggest the situation is already irreversible for other reasons.

A parallel study released just a few months ago analyzing other aspects of what is happening to the Amazon Basin is that the combination of mass deforestation and development, global heating which has contributed to an ever-escalating cycle of the forest drying out then exploding into wildfires, particularly starting in 2019, has put the Amazon Rainforest on a death march. That death march concluded that the region’s complex ecological system will be completely dead in less than 45 years.

The new study shows the Amazon is already no longer the friend of climate change conservationists. It is instead a net carbon emitter making global heating worse every day. That, combined with the other new study, points more than ever to our needing to face reality – that the climate crisis cannot be stopped – and find new ways to survive our future.

Climate Survival Solutions Private Limited (India) and Climate Survival Solutions, Inc., PBC were founded to help us all navigate the climate crisis, with new low-emissions solutions for construction, energy generation, water-efficient agriculture, advanced waste management technology, and energy generation. The companies are also currently raising seed capital to expand their efforts and are seeking new investors. We urge our readers to visit their websites and contact them for more information.